The Sad History of the Kid-Sized Handcuffs

In the late 19th century and the first half of the 20th, Native American children often attended government-run boarding schools where the objective was assimilation. Army officer Richard Pratt, who founded one such school in Pennsylvania, famously said that his mission was to “kill the Indian … and save the man.”

To that end, the schools forbade children from speaking their tribes‘ languages; enforced strict rules around food, sleep, and dress; and taught simple trades in the hope of transforming a “problem” group into tractable citizens.

Families sometimes sent children to the schools willingly, but there are also many tales of children being taken away from their parents by force.

According to their donor, these handcuffs were used to restrain children who refused to go quietly. We have no definite documentation of their use, but given the many stories of harsh discipline used on students in these schools—Haskell, which was a boarding school in its early years, had an on-campus jail to confine children who stepped out of line—this history seems plausible.

In Pember’s initial article on the cuffs, she reported that the Haskell staff had been unable to contact the artifact’s donor for years. After the article was posted, he came forward to tell his story.

Shane Murray’s grandfather gave him the cuffs when Murray was only 8 or 9 and told him that they were “used to take Indian kids to school.” His grandfather warned him never to play with them. Although Murray doesn’t know how his grandfather—a WWII veteran who suffered from PTSD and was withdrawn and reticent—came to own the artifact, Murray’s grandmother was a Native American from Oklahoma. Murray speculates that the handcuffs may have come from her. 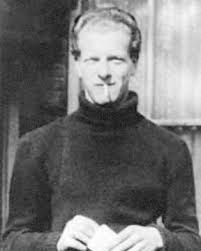